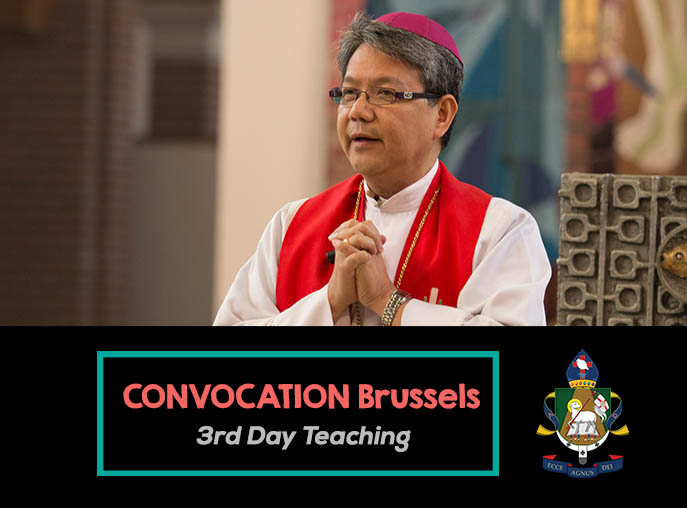 Jesus and His disciples were caught in a storm in the middle of the sea. Jesus was in the stern, asleep. The storm didn’t bother Him because He knew that His life was in the hands of the Father. Such was His confidence that He could sleep in the midst of a storm. The disciples, however, still didn’t have the revelation that the Father would keep them safe; so they were afraid and panicked. We know the story.

They arrived on the other side, the country of the Gerasenes where they met a demon-possessed man. Jesus cast out the demons, but here’s the remarkable thing. They were demons but they implored Jesus earnestly not to send them to hell. Hell is their natural habitat, where they belong. You would think they would ask the Lord to send them back there. It must be a terrible place.

For three days now, God has been making new wineskins of us, so He can pour new wine into us. The new wine is the work of the Spirit. The new wine skin is the Church. The parable says you can’t pour new wine into old wineskin because it will burst and spoil the wine. In the same way God is preparing a people for new work. It may be the same people to do new work, and therefore these people should not remain the same. They should not grow old. The main difference between the old and the young is the young are passionate and driven, out to conquer the world. If the average life span is 80 years, then we can divide life into four quarters. The first quarter is from age zero to twenty. The second quarter is from twenty one to forty. The third quarter is from forty one to sixty, and the last quarter from sixty one to eighty. For most, when they enter the third quarter of their life, they tend to lose their passion for life. They just coast along and go through the motions of life. But new wine requires passion.

There was an international minister who, at the age of 53 began to be forgetful. This minister, though, refused to accept the forgetfulness, confessing from Scripture, “I have the mind of Christ”. He believed this and constantly confessed it. He died in his 80s still with a sharp mind and fulfilling his purpose on earth. As His Church, God is preparing us and we should be open to the new things that God is doing. Don’t let the “old man” come in because he is always knocking. Look at the Archbishop – after he retired, more work is being opened up to him. We can’t lose our passion because when we do, like a disease, we “infect” others with it and they, too lose their drive. We’re in Ordinary Time; our convocation is taking place in Ordinary Time. Ordinary doesn’t mean common. It means “ordained”. We are in ordained times, set, prepared and completed by God so we can live out the “completeness” of what God has done in Christ. This is what Ordinary Time means. From Advent to Pentecost, we celebrate the completeness of what God has done in Christ’s work. The rest of the year is the time for us to live out the completeness of that work.

In the second reading, they weren’t able to go on and move with God. There were disputes among them about how the Church was to be handled. From the first reading and the Gospel, I want to give you a “negative” motivation. The demons didn’t want to go back to hell which was their home, preferring instead to go to the pigs. Hell is a place of terrible and eternal separation from God – without God, without hope and without life. Last month there were days when it was terribly hot. One night last month, it was uncomfortably hot in our Paris apartment and I longed for just a breeze to give me some relief. Suddenly a gust of wind touched my feet and I was so relieved and refreshed. Hell doesn’t have that relief; not even for a fraction of a second. Imagine yourself in that state without hope of being released from it. The torment and hopelessness should motivate the Church to do good, to avoid hell, not just for ourselves but also for those who don’t know Christ.

In the Old Testament, God made Saul king and this went to his head. When he was rejected by God, he went to a certain place to build a monument for himself. God directed him to destroy the Amalekites and spare nothing, but he disobeyed and took some nice things which he would use to offer to God. God rejected the offering. This relates to the knowledge of good and evil which led Adam and Eve to sin. The devil said, “Did God tell you not to eat of the fruit because you will die?” They replied yes to Satan. Instead of taking authority, they fellowshipped with the devil and believed his lie. “When you eat of the fruit, you’ll have knowledge of good and evil” means you become the god of yourself. You’ll determine yourself what’s good and what’s not. This happened to Saul and as a result, he was rejected by God. Saul became so desperate that he consulted a medium, even if he knew it was wrong. The Holy Spirit departed from him. This is the negative motivation. Had there been a community by which people can be guided, encouraged, prayed over, challenged and exhorted, this could have been prevented or minimized.

Today God is calling us to for a special, new work. We must be young forever. We are in the mind of God. Sometime in January, in the midst of our preparation for the convocation, I received a strong message which I believe is from God. He said, “I’m taking you and the church to the Promised Land”. In the Old Testament, there were giants in the Promised Land and not everyone made it there. Those who chose the wilderness and chose to remain old didn’t make it. What this is telling us today is we must choose to remain young in the midst of what God is doing. Ask the Lord to give you a second wind. “Those that wait upon the Lord shall renew their youth like an eagle.” Those who honor the Lord shall have their strength renewed.  The physical body may be old but the spirit is being renewed. Some habits and attitudes must be changed and the desire for the things of God rekindled. This is what God is calling us to do. There won’t be a better time in our lives than this time. God is giving us an invitation and I pray that we will say yes. Do not fear. Don’t think that you can’t. You are not old. We’re just beginning. There’s a new work that God is doing in our midst. I pray that God may find in us a heart that won’t be intimidated by the obstacles. Yes, there will be storms along the way but remember that Jesus slept through the storm. God’s Word has not changed; the beginning has not changed. The footprints that we continue to see we are to walk on. Don’t reinvent the wheel. Some battles are not worth fighting. Choose your battles. Conserve your energy for the work that God will give. Be a people that is constantly on the go, fighting for the Kingdom of God; not old but forever young.

Convocation 2018 Message from Our Presiding Bishop

The Lighter Side of Convocation Brussels