A Declaration of Victory 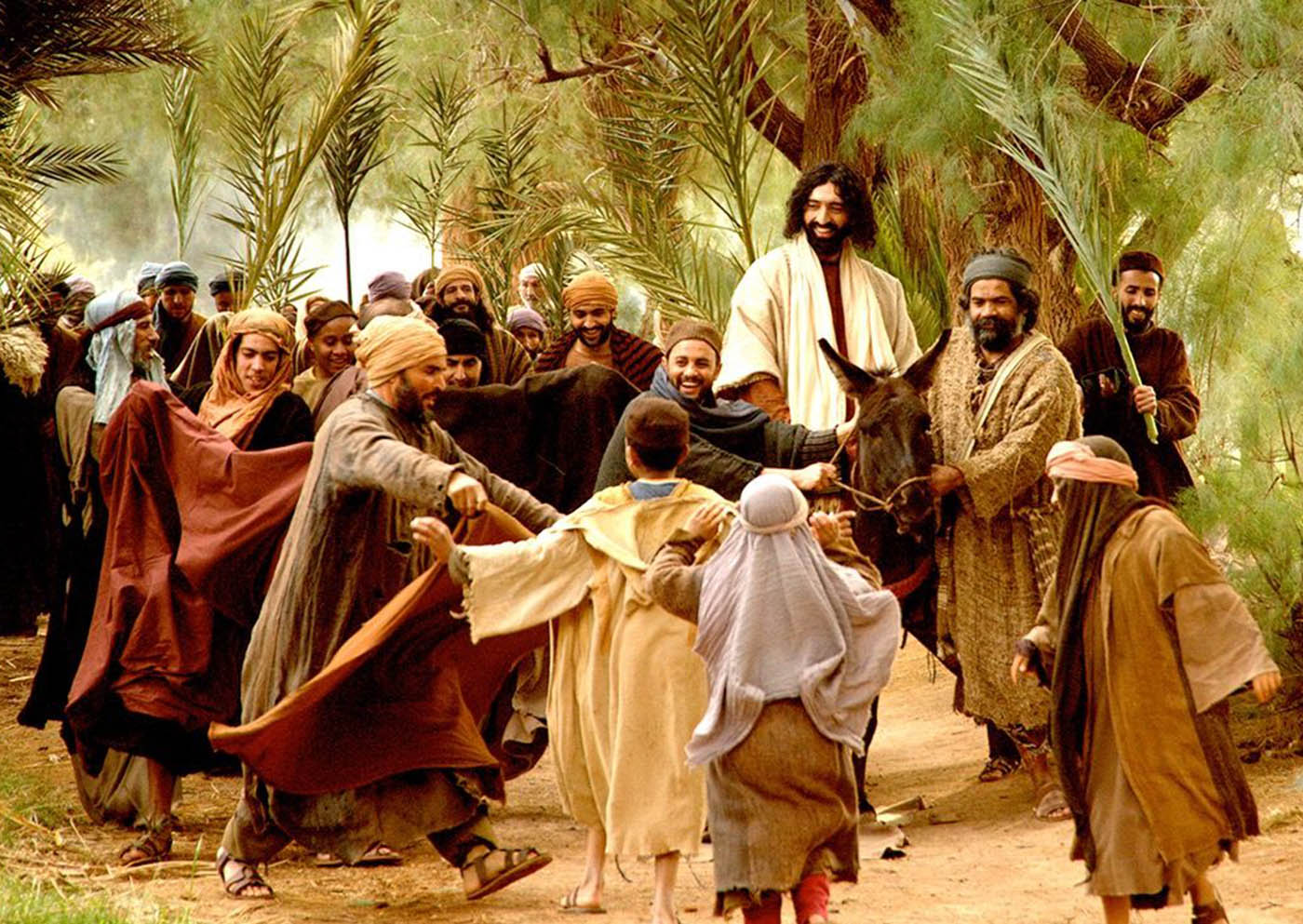 The reading of the Gospel encompasses the whole week, but today I’ll talk about Palm Sunday. Palm Sunday is a major event in Christianity and in the life of Christ. In our time, we have made it a celebration rather than a proclamation to the world, to the enemy and to us. In the Gospel, the Jews were in Jerusalem for the Passover. It was a time when all the men living within 20 miles had to go to Jerusalem to celebrate together. There were approximately 2.5 million people gathered in Jerusalem at that time, making it very crowded, and it was there that God chose to make His love known – very publicly among the multitude, and not in secret.

After raising Lazarus back to life, Jesus became very famous. They knew that He healed the blind, the deaf and the demon-possessed, but the news that He had raised a dead man had shaken Jerusalem and Israel. People came into Jerusalem, excitedly talking about this miracle and the leaders were in great fear. They feared that with the big crowd, there could be a rebellion, even a revolution. It could be a potential problem for the city and the leadership. As Christ was entering Jerusalem, the people were shouting “Hosanna to the Son of David; blessed is He who comes in the name of the Lord; Hosanna in the highest!” Hosanna means “save, we pray” or “save us”. They were shouting, “Save us! Save us!” because they believed that it was Christ who would deliver them from the oppressive Roman rule and give them back their freedom. They thought and hoped that this would be the coronation of the king, but there was one thing that was contradictory to what they thought. Jesus came riding on a donkey. Kings ride on horses which are symbols of strength and power, and not on donkeys. The donkey the Lord was riding on was not even trained; it was just a colt. Like a child, an animal should be trained to do the work. A horse that is untrained to carry a person could bolt and unseat the rider, even fight him. The colt Jesus was riding on was young and untrained, yet He chose it. This says a lot to us. Israel wanted a king but they were not faithful to Christ; they were rebellious like a young colt. So Christ riding into Jerusalem as King was riding into a rebellious situation. He was coming to a people that rebelled against God. (In the Garden, Adam gave his authority to Satan who became god of the world because of man’s rebellion.) As He came into Jerusalem, Christ also knew that the Pharisees and the Romans were angry at Him. He was coming into a tense situation, yet He was bold and strong enough to face it without fear. The entry into Jerusalem started in Bethany where Jesus went into a home and anointed with a very costly perfume to prepare Him for the events that were ahead of Him. The anointing of His feet with this costly perfume was to prepare Him to bring into Jerusalem and the world a new life. But just a few moments from this anointing, Judas, His friend, would betray Him.

As Jesus approached Jerusalem and came into Bethpage, He sent two of His disciples to the opposite village and find a donkey and a colt tied with her and bring them to Him. The reason why He asked them to bring Him both the donkey and her colt is when an animal gives birth, the mother and her young stay together for a long time. This shows the Lord’s sensitivity to the needs of the animals. He wasn’t going to ride on the mother but brought her along just the same. The Lord told His disciples, “If anyone says anything to you, you shall say, ‘The Lord has need of them,’ and immediately he will send them”. Can you imagine someone coming to your house to take your car because they tell you Lord has need of it? Will you let it go? I don’t think so. In this instance with the colt, we can see the work of God and the authority and power of Jesus because the people didn’t oppose His instructions.
This was prophesied in the Old Testament. “Rejoice greatly, O daughter of Zion! Shout in triumph, O daughter of Jerusalem! Behold, your king is coming to you; He is just and endowed with salvation, humble and mounted on a donkey, even on a colt, the foal of a donkey” (Zechariah 9:9). This was prophesied long before it took place, saying to Jerusalem, “Rejoice! Your king is coming to you!” Obviously, the Jewish people weren’t paying attention to what the prophets of old said. They didn’t understand the prophecy because if they did, they would have known that Christ was coming to them on a donkey to give them new life. “….He will speak peace to the nations; and His dominion will be from sea to sea, and from the River to the ends of the earth” (Zechariah 9:10). The prophet is saying that the event that took place in Jerusalem, which we now call Palm Sunday, is going to affect the whole world, because Jesus would bring new life to all the world. “Say to the daughter of Zion, ‘Behold, your King is coming to you, gentle and mounted on a donkey, even on a colt, the foal of a beast of burden’” (Matthew 21:5). Donkeys are work horses, beasts of burden; they carry heavy loads. They are submissive and obedient. This is a proclamation to us that Jesus carried the sins of mankind upon Himself, becoming a “beast of burden” for us.

As Jesus entered Jerusalem, the crowd gathered and spread their coats on the road along the path of Jesus. When man sinned in the Garden, he realized that he was naked, so he covered himself. The crowd in Jerusalem took off their coats and laid them at Jesus’ feet. This was a statement that Christ would come to take away their sin and to hide their failures and mistakes. This is the message to us today: Christ came to take away our sin and shame, and set us free. The others were cutting branches from trees and spreading them on the road. Palm branches are a symbol of victory. Christ coming into Jerusalem is a declaration of freedom for mankind. This day speaks very loudly to our lives today: the sin is gone; it’s no longer held on our account. Victory is given to us in Christ. The ceremony we go through is to make a proclamation of what Christ is going to do. On Easter Sunday, we will celebrate because His work is complete.

This week, Jesus would cleanse the temple, heal the sick, make a declaration to His disciples of His body and blood, go to the cross and gives His life for us, and then He rises from the dead after destroying hell and releasing its prisoners. This week is filled with the history of God coming to set His people free, and therefore the events of this day are very powerful, a proclamation of new life to us. In some places today, we would see the church parading in the community to make a declaration that Christ has set us free. It’s a declaration of victory; of the enemy being destroyed and new life given to us. So let’s get our palm branches and wave them.

There were Pharisees in the crowd that day to spy, to see if the people would revolt and mount a rebellion. As the people shouted “Hosanna”, the Pharisees said something to the Lord that was shocking: “Teacher, tell Your people to stop shouting”. They called Him teacher; they acknowledged His authority. Jesus responded, saying, “If they stop, the rocks would cry out”. I believe that the rocks are shouting in many places nowadays because people are no longer praising the Lord. In Europe, the most visited tourist attractions are the cathedrals. They have become just tourist attractions, and it’s the governments that maintain them because these cathedrals don’t have the funds for it. People no longer go to church to worship God.

When Jesus saw Jerusalem, He wept because they didn’t recognize their day of visitation. He was coming to redeem them, wipe away their iniquities and give them new life, but they were going to kill Him and try to destroy what He was coming to do. He was weeping because God loves them so much that He was giving them His Son, but they didn’t see it. They didn’t recognize their day of visitation. This was the day when Jesus entered Jerusalem – we call it Palm Sunday – and He was proclaimed King. The palm branches we use today, in the Christian world are collected, then burnt and their ashes used on Ash Wednesday to show our commitment to God. Today we proclaim the Lord’s victory but in 5 days, we’re going to crucify the King. Jesus was bringing peace but the people didn’t recognize that. Jerusalem means “foundation of peace”. It was established to bring peace and there was a time when it did. Today, however, the peace is no longer there. Scriptures instruct us to “pray for the peace of Jerusalem”. This is because while the day will come when Jerusalem will once again be a place of peace, at present there is a “battle” going on. The site where the Temple used to stand is now occupied by the Dome of the Rock. The Jews want their temple site back, but the Muslims won’t yield it. There is a conflict but peace must come to Jerusalem and we are commanded by God to pray for Jerusalem. There’s a reason why God asks us to pray for Jerusalem: it is the place where our salvation took place. Jesus gave His life for us in Jerusalem. He went there to proclaim that God loves man so much that He would give His Son to take away sin and bring us peace. Jesus said, “My peace I give to you”, yet we don’t allow this peace to reign in our lives. We allow every little thing to bother us – anger, bitterness, jealousy – and divide us. The center of this peace is Jerusalem. The world is in the state it’s in because there’s no peace in Jerusalem. So even if today is celebrated as Palm Sunday, it was a declaration of what God was preparing to do for us – to bring us peace by taking away our sin. On this day, keep that branch waving. Put it up in your houses to remind us that God gave us peace. Keep your peace, your victory. Maintain what Christ has paid a high price for. Don’t let it fade away. God loves you. God is not angry at you. He has forgiven you. You are His children.