We Are Called To Wash Our Neighbors’ Feet 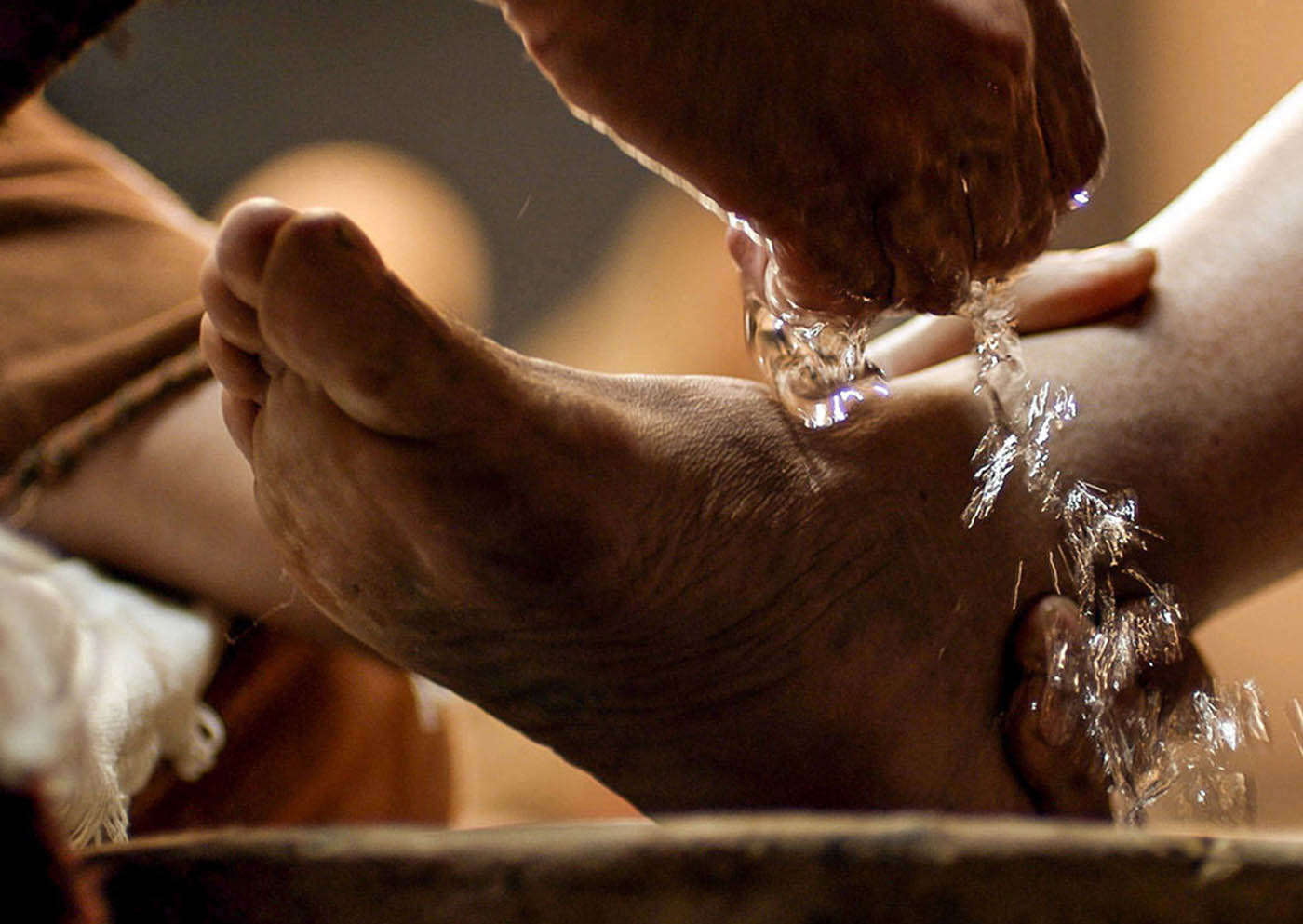 Jesus told His disciples, “I have earnestly desired to eat this Passover with you before I suffer” (Luke 22:15). If we evaluate the timing of this event, it wasn’t actually the Passover. His suffering began at Passover and so in order for Him to celebrate the Passover with His disciples before His suffering, they had to do it the day before. When Christ was crucified, it was at the same hour that the Jews were sacrificing the lambs at the temple to prepare for the Passover. He was now to become the Passover Lamb. The Passover is based on Israel’s delivery from Egyptian captivity. They were in captivity because of their own failures for over 400 years. They were in misery, pain, and suffering, and were very much persecuted by the Egyptians. To this day, the pyramids and other monuments in Egypt are still standing, and they were built by the Jews. They even had to make the bricks themselves. This shows us how God set the course and direction, even in the Old Testament, and that He will complete them in the New Testament for us. The New Testament is a fulfillment of the prophecies of the Old Testament, and this brings into our lives the love and compassion of God.

The Passover is named as such because God told Israel that if they would prepare the Passover lamb – one year old male and unblemished – and take its blood and put it on the doorposts of their homes, when the death angel comes, they would be passed over. This proclaims what God would later on do on the cross. His blood was shed for us; we are covered by His blood and this saves us from the death angel. Didn’t Jesus say that even if we die, we live because God has put His Spirit in us? His Spirit lives forever and cannot be killed. This talks to us about the power of the blood. When the Jews left Egypt for Canaan, not one of them was feeble. The death angel couldn’t touch them because of the blood of the lamb. Feebleness is of death; sickness is of death. Scriptures tell us that “by the stripes of Jesus, we were healed”. Do we believe that we’re already healed – already, not going to be? Our healing is just like the forgiveness of our sins that has already been taken care of on the cross. By faith, we must receive what He has given us.

At creation, God gave us His character when He breathed into man and spoke to his DNA: “Be fruitful and multiply; fill the earth and subdue it; cultivate and keep it”. He put into Adam’s hands the responsibility for the world, but he failed and handed over that authority to the enemy. Christ came to restore that authority to man. The Passover tells the Jews that they have been set free by the blood of Christ. This is also true for us; we’ve been freed from the work of the enemy. We have to look back because the past will give us an understanding of what is ours today. The blood of Christ should tell us that the enemy has no right over us because our bodies are the temple of the Holy Spirit. What God did is perfect; He doesn’t have to repeat it. He sent Christ to the cross once to save the whole world and it was a perfect sacrifice. What God did is perfect. We’re the ones who are imperfect; we struggle, change our minds and fail. Sometimes when we pray to God, He doesn’t answer right away. He hears us the moment we pray but we don’t get the answer right away because there’s interference in our own lives and in the atmosphere. There’s an account in the Old Testament where the answer to a prayer didn’t come for 21 days and Michael the Archangel had to come and hold back the enemy so the angel could bring the answer to the prayer. So don’t think that God doesn’t answer prayer; He does. We must be steadfast the whole time and not give up. Remember the story of the lady and the evil judge? The lady wore down the judge with her persistence. We hold on till the interference is resolved. God doesn’t condemn us when we fail, but we have free will to give up and reject what He gave us or to receive and walk in faith.

Just like the lambs that were offered, Jesus was a male without blemish who went to the cross on our behalf. He knew no sin. The work of the male, unblemished lamb in the Old Testament was done for us by Jesus in the New Testament. The blood of Christ works for those who believe, saving them from the curse. The blood of the lamb saved Israel as they left Egypt; none of them died or was infirm. We don’t know how old they were, but there were the elderly among them and they made their journey across the hot desert. We don’t know what it was like for them – held in captivity for 400 years, then making that journey in the wilderness for 40 years. What a people! God gave them that ability through the blood. The lambs that were offered were perfect, with no bones broken. In those days, those who were crucified had their legs broken to speed up their death. Christ was already dead before they could break His bones. It was prophesied that He would do His work for our salvation without any infirmity. He was not incapacitated in any way, and we are set free both physically and spiritually. What happened in the journey of the Israelites is a prophecy of what Christ would go through. This is what this day is all about – the Passover – and it brings to us a hope and assurance. Christ was the end of the law for us. He didn’t do away with the law but fulfilled it on our behalf. We’re not obligated but choose to obey the law. If we disregard it, Scriptures say it could bring sickness and even death. Nothing happens without reason. We bring the bad into our lives by our disobedience and unbelief.

The Passover meal was a dedication and a setting for Christianity and the world to follow. The body and the blood are given to us in the Holy Eucharist because it is to be our Passover. Jesus is our Passover Lamb. We come to His table to be reminded that we’ve been covered by the blood of Christ. But many times, we’ve made it ceremonial. Some take the Eucharist because of superstition; they believe that if they don’t, something bad would happen to them. If we ignore the blood of Christ, what else do we have to save us and give us hope?

In the celebration of the disciples with Christ, they were human like us, with their own agendas, desires and ambitions. John was said to be the closest to the Lord and the others also wanted to be in the Lord’s inner circle. They had conflicts, much like the church today. Instead of being what God wants us to be, we want to be the one who calls the shots. It’s human to want to move to the top; God created us to be that way. But there’s a limitation to this. There must be respect for others and the things of God. Jesus was about to face death and there they were, arguing about who would take over and be the boss. Jesus knew what they were thinking. He was aware that there was conflict, and it was then that He stopped the supper, took off His undergarments, wrapped a towel around His waist and told them that He was going to wash their feet. It wasn’t ceremonial but fraught with meaning. Jesus was the Son of God, number 1 in the chain of command in the world and everyone was to serve Him; yet He would wash their feet. The disciples’ feet were dirty because they walked on dirt roads. It was a tradition in those days that you couldn’t enter a house without first washing your feet. There was nothing more humiliating for Christ to do. When He came to Peter, Peter wouldn’t let the Lord wash his feet. Jesus said, “If I do not wash you, you have no part with Me”, to which Peter replied, “Lord, then wash not only my feet, but also my hands and head”. He said this because He wanted a relationship with the Lord.

Jesus poured water into a basin for the washing. Water is for cleansing. He is saying to us today that He is washing our feet so that our walk with Him will be done in righteousness, making certain that we walk in what He has given us; that our walk may bring Him glory. He is washing away the ways of the world from us – pride, envy, division, self-centeredness. He washes our feet so we can walk in unity and with compassion for each other. He tells us that as He has washed our feet, we are now to wash each other’s feet. This means we are to give of ourselves to make certain that our brothers and sisters are able to walk in the righteousness of God. We help them, using our hands to wash their feet. Symbolically, this means we are to make certain that they are walking in a manner that’s pleasing to God and not on a path of destruction. We are to get our hands dirty, giving our all as Jesus did. He said, “It’s expedient that I die because if I don’t die, there will be no life”. In the same way, we must be willing to give of ourselves to help others, whatever it takes. This is humility, selflessness, caring for others, making certain that our neighbor makes it and doesn’t give up. This is our challenge.

This is what Maundy Thursday is all about. It’s when Christ begins the final act of His life and He does it in humility, not in anger or defensively even if He was under tremendous pressure. He didn’t think of Himself; He thought of His disciples; He thought of us. Make certain that you give of yourself. Wash the feet of your brother and sister that they may be able to make the journey in righteousness, pleasing to God.

Having Hope By Knowing The Signs