CHRIST the King Has Opened the Door to Paradise 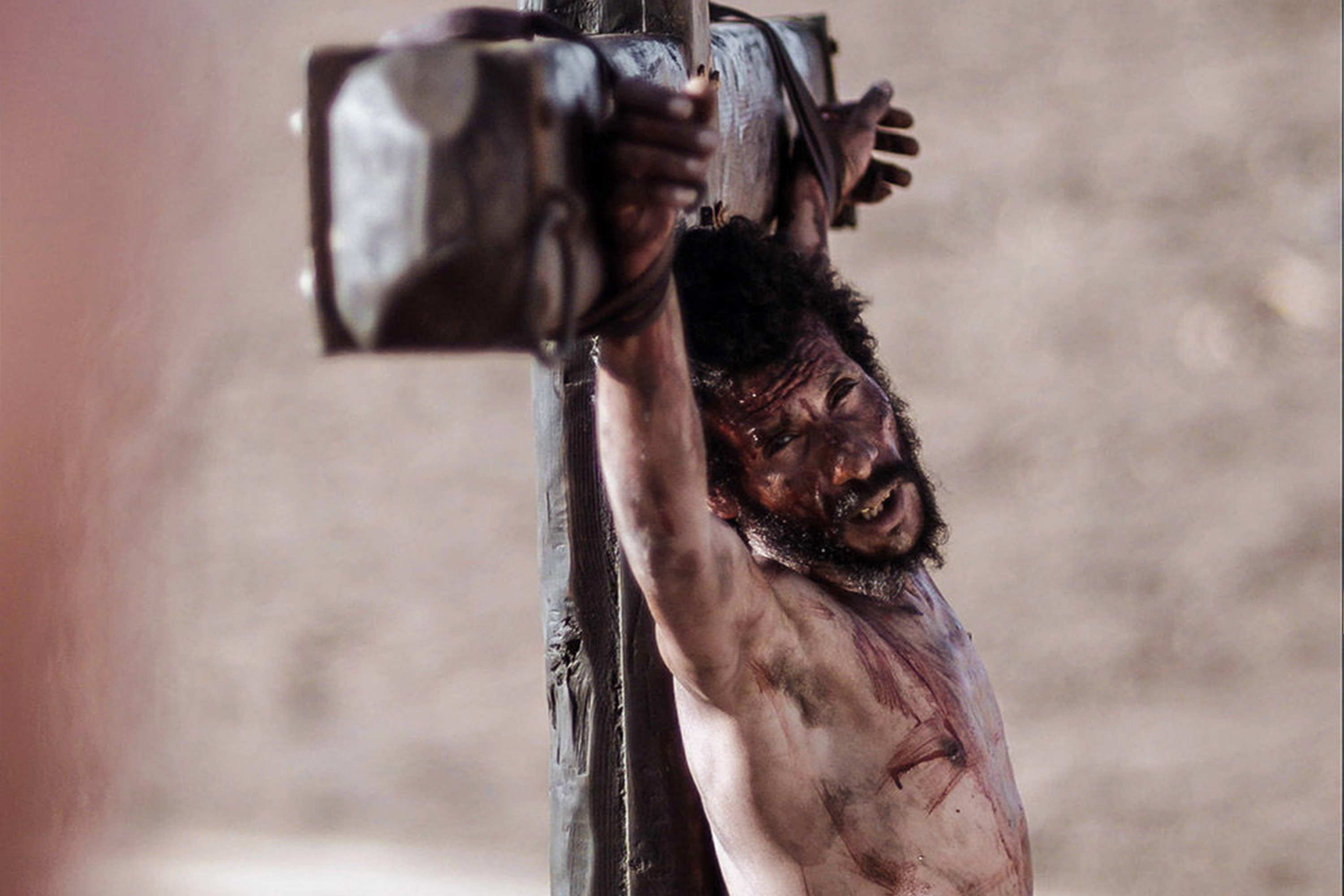 Today is the Feast of Christ the King. We always associate a feast with celebrating with an abundance of food and drink. I challenge you today to go beyond food and drink and having a good time. Feasting is LIFE itself when we’re walking with the King. Life becomes a feast, filled with thanksgiving and joy. Pain and challenges may come but they don’t rule us. We overcome them because we’re walking with the King.

This last Sunday of the calendar year brings to a climax all the work of Christ in our lives. He has taken away all the forces of evil and given us everything that His Father gave Him. We’re challenged today to realize that Christ is King; it’s not the other things that should rule us.

In the Gospel, Christ makes His final offering for us – His life. Man has been imprisoned by fear of death so He took upon Himself the sacrifice that will give us freedom. In the Old Testament, Jeremiah prophesies about the coming King: “Behold, the days are coming, declares the Lord, when I will raise up for David a righteous Branch; and He will reign as King and act wisely and do justice and righteousness in the land” (Jeremiah 23:5). This has been God’s plan since the fall of man in the Garden. In the New Testament, St. Paul tells the Colossian church that “He has delivered us from the domain of darkness, and transferred us into the kingdom of His beloved Son, in whom we have redemption, the forgiveness of sins” (Colossians 1:13). There’s nothing greater than the power of God. Psalm 46 tells us something that we should pay attention to: “Cease striving and know that I am God; I will be exalted among the nations, I will be exalted in the earth” (Psalm 46:10).

We read in Genesis that God created man in His image and likeness. Man lived in the Garden without sin – no lusting, no greed, no lying. God gave man the responsibility to take care of all creation. All went well until Adam was tempted by the enemy and ate of the tree of the forbidden fruit. He came to the tree in righteousness – he was naked, perfect and without sin. After he ate of the fruit, he immediately covered himself, suddenly ashamed of his nakedness. This was the effect of sin. Thereafter, God assigned an angel with a flaming sword to guard the way to the tree of life and prevent anyone from coming near it. With man’s disobedience, He drove man out of the Garden of Eden. Man could no longer go back, and death and Satan ruled the earth.

In Matthew 2:2 we read that when Christ was born, the magi who were not Jews received a message that the King of the Jews had been born. Even before He was born, Jesus was already King. He was King from the very beginning. When He entered Jerusalem, the people welcomed Him with palm branches laid on His path and He was proclaimed King. Everything that Jesus did in His life on earth – the healings, preaching and other miracles – He did as King, as the ruler of all creation. All His life, Jesus was victorious, in authority and power because He is King.

Jesus went to the cross as King, not as a sinner. Even as He took upon Himself our sins, He never stopped being King. He faced His passion and death as King. He knew He could face persecution and death. He didn’t go to the cross defeated, anxious that He would fail. Because He was beaten, crucified and died on the cross, man thought He failed. We judge things and situations as we see them, even if we don’t have full knowledge of what we see. The people were shouting, “Crucify Him!” Jesus said, “Father, forgive them for they know not what they do”. The people did not get rid of Him; He went to the cross on His own free will in obedience to His Father.

The cross was a tree. Man first died because of a tree. Man was naked when He came to that tree (in the Garden). Jesus was naked when He went to the cross. He identified with man at that point – He was dying, naked, just like Adam in the Garden. But Jesus didn’t cover Himself in shame as Adam did because He conquered sin and He was victorious. Jesus came to that point – to die on the cross, to redeem man from his failure in the Garden. He was not guilty of sin like Adam was. He didn’t need to die. But He died for us. In His life He conquered everything that was not right – healing the sick, casting out demons, raising the dead – and He was always victorious.

Perhaps we don’t take the time to reflect on the cross. It was cruel, barbaric. The nails held Him up, nothing else. He couldn’t brace Himself because the nails would cut through His feet and His hands. His breathing was agonized because the nails on His hands made it difficult to draw breath. He was in unspeakable pain, but not once did He complain. He could have just chosen to die without suffering such pain, or He could have called on the angels to save Him, yet He held on because He was paying the price for us – the price for our redemption and healing. He appeared to be a failure to the people because they had no spiritual understanding of what was happening. This is also why they wanted to kill Him even if He didn’t do anything wrong. They mocked Him; they didn’t know that He was destroying the power that kept us in prison. To them, He had lost the battle because they were looking to Him to free them from Roman rule. They were looking at everything with natural, not spiritual eyes. He hung on the cross for all the world to see. He was naked, without any sword or weapon, just as God created Him. The totality of God’s ability in Him empowered Him to fulfill His mission.

Jesus’ cross was planted at the center, in the middle of two thieves. Spiritually, this signified that He planted Himself in the midst of our transgressions. He had to be identified with them because He was paying the price for our transgressions. One of the thieves hurled abuse at Him, saying, “Are You not the Christ? Save Yourself and us!” But the other thief rebuked him, saying, “Do you not even fear God since you are under the same sentence of condemnation? And indeed we are suffering justly, for we are receiving what we deserve for our deed; but this man has done nothing wrong”. Then he turned to Christ and said, “Jesus, remember me when you come in Your kingdom!” Jesus responded to him (and we don’t realize how painful it was for Him to talk), “Truly I say to you, today you shall be with Me in Paradise”. This speaks of the great love of God for us, that He would forgive us instantly when we repent. In the Garden, God commanded man not to eat of the forbidden fruit because the moment he eats or even touches it, he shall surely die. It was an instant death. On the cross, Jesus told the thief, “Today you shall be with me in Paradise”. It was forgiveness and life in an instant.

The gates to Paradise had been barred since the fall of man. The first one to enter it was the thief when Christ, by His death, took away the flaming swords blocking the gates to Paradise. Do you think that your sins are too great that you can’t be forgiven? Christ paid the price. No sin is too great for His forgiveness. Christ bore all our weaknesses and sin, and He opened the gates to Paradise. He went to the cross as King for only one purpose: to destroy the works of the enemy. The enemy no longer has power. We are the ones who give him power by our unbelief.

The repentant thief is now named as one of the saints of the Church. This is how loving our God is. His heart is love. His actions are full of compassion. The thief was guilty and deserving of the cross, but Jesus forgave him because he said “Lord”, acknowledging Christ as King. On the cross of Jesus, the people, in mockery, put a sign above Him – “This is the King of the Jews”. They unwittingly were proclaiming the truth. On the cross, Jesus’ arms were outstretched, symbolizing that He covers all mankind with His sacrifice of love. When He died, the veil in the temple was rent, from then on held open for all. The repentant thief wasn’t trying to get away from his punishment because he knew he was deserving of it, unlike the other thief who wanted Jesus to save him from the cross.

On the cross, Christ brought all of us to Paradise where there is no more pain, no more shame nor condemnation. The pain would cease forever in Paradise. It doesn’t matter what you’re facing now because God has made a way. Take your eyes off your problems. God has brought us to Paradise. He is King, and He did not stay seated on the Throne but came down to identify with us, suffering all our pain. As I was meditating on this, I was thinking of Sister Len. God has made a way to set her free because Jesus has paid the price.

“Cease striving and know that I am God.” I am King! This is what God is telling us today. Our back may be against the wall; our problems may be bigger than we can handle, but they are never bigger than our God. We should always remember that God has made a way out for us. We have to die to self and let Him open the door for us. This is why He is King. He doesn’t know failure. He doesn’t have enemies because no one is big enough to come against Him.

He has opened the door! We have to put this in our heart. He will bring us to Paradise, not just when we die, but even now as we live. Stop thinking failure. When trouble comes, say to yourself, “This doesn’t belong to me. Christ has delivered me from this”. We make the sign of the cross on our head because it’s in our head (our thinking) that we need to be delivered. The enemy has no authority over us because of the cross. Jesus went to hell to destroy the headquarters of the enemy. He did this to set us completely free. He made a way. Nothing can stop us if we trust Him. This is what the Feast of Christ the King is all about.