Feeding Of The Multitude 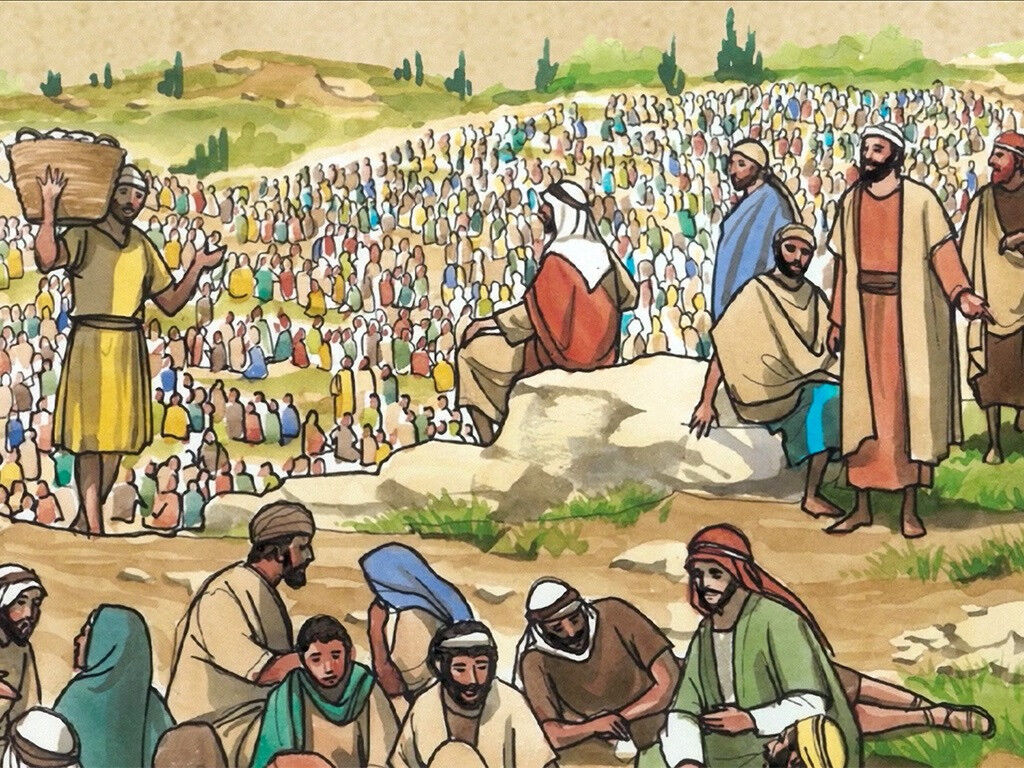 Ephesians tell us that we are God’s workmanship, created in Christ Jesus for good works. God has done so much for us and yet many of us are still in doubt. God created us for good works. We have been created ahead of time for good works. This should be a daily routine in our lives. Instead of being selfish and just thinking of our own benefit, we should be a source of hope for others.

We see here that after ministering in Cana, Jesus got into the boat, crossed the sea of Galilee and crossed over to the other side. The people whom He had ministered, started to follow Him by walking on the edge of the sea to where Jesus was going. They did not mind the long walk which was about 14 and a half kilometers, just so they could be with Him. They were so enamored by His presence that they wanted to be with Him again, to hear Him speak, to learn from Him They were not getting any quality teachings from the synagogues and here was a teacher teaching them the principles of God and even healing them. When they finally reached the place where Jesus was, he saw the multitude and sensed that they were exhausted and hungry. He sensed their needs. He discerned how they must have been feeling. Shouldn’t we be concerned over the welfare of others like Jesus was? 2nd Chronicles 36:15 And the Lord God of their fathers sent warnings to them by His messengers, rising up early and sending them, because He had compassion on His people and on His dwelling place.

These people that came to Him were ordinary people. They were not the elite or privileged people. They were hungry for the things of God. They came seeking for Christ, and Christ was concerned for their needs. He had compassion on them.

James 2: 15-17 Suppose a brother or a sister is without clothes and daily food. If one of you says to them, “Go in peace; keep warm and well fed,” but does nothing about their physical needs, what good is it? In the same way, faith by itself, if it is not accompanied by action, is dead.”

Jesus turns to Philip and asks him where they could buy bread. And Philip, being accustomed to that area, knew that there would not be enough bread available to feed 5,000 people or more. But Jesus was testing him for a future event that was to take place. Then Andrew tells Jesus that there was a boy who was carrying 5 loaves of bread and 2 fish. So Jesus said, “tell the people to sit on the grass.” There was no grass in the desert or wilderness, but here was the provision of grass by God for the people to sit on. Nothing happens by accident. Everything has a plan. God is the One who created the whole earth. Couldn’t he feed 5,000 people? When he told Philip to get bread, He did not say, go find money to buy the bread. He simply said, buy the bread. Jesus, after telling the disciples to let people sit on the grass in orderly rows, picked up the loaves of barley belonging to the poor boy who could not afford something more expensive as barley was the lowest and cheapest grain at that time.

Ephesians 4:28 “Anyone who has been stealing must steal no longer but must work, doing something useful with their hands, that they may have something to share with those in need.

Christ takes the little offering from a poor boy, blesses it, and is able to feed the multitude. He broke the bread and fish into pieces and gave these to the disciples for them to distribute to the people. And the people ate all they wanted and were satisfied because the food kept multiplying. Can you see the awesomeness of God shown here as a proof of His concern for people? And how appropriate this lesson is for the Season of Lent to teach us how we should be concerned over other people’s welfare. When we sit down to eat, we should be thankful at all times and be appreciative that the food came from God. It further tells us in the story that when the people were satisfied, Jesus told the disciples to gather up the fragments so that there will be no wasted food. We need to learn from the lesson of not wasting food. He is teaching us how we should take care of the poor. How we should be concerned for those in need. What He has given us we have to use properly. And when we bless others out of a motivation of love and giving, it will come back to us even more.