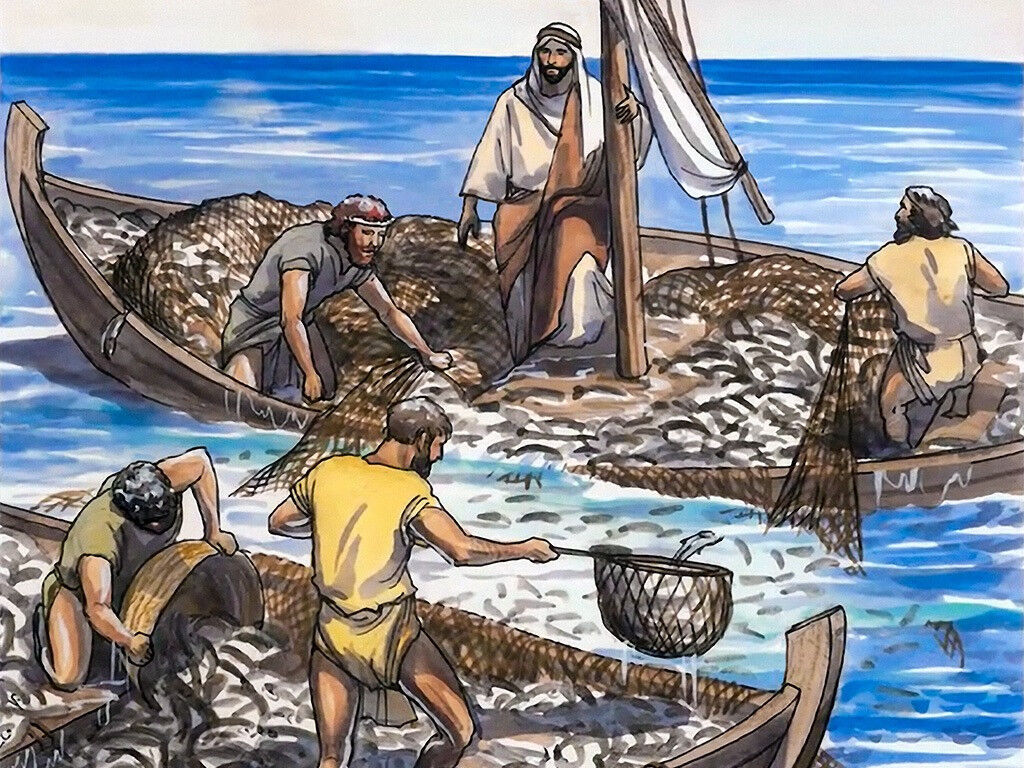 During the three years of His ministry, Jesus traveled a lot and most of the areas He went to were outside of Israel and therefore places of the gentiles. Today’s account brings us to the seaside. A totally different environment and setting, away from a building, away from the synagogue. But there was still a multitude who followed Him and came by the lake. The lake was a huge one. It was known by three names; the Sea of Galilee, Lake of Tiberias and Lake of Gennesaret. The lake, it was said, was below sea level and very deep. And since there was a large crowd and Jesus could not really be seen, He noticed two boats that were empty so he went into one of the boats to preach from there. From this vantage point, people could now see Him.

He sat down on the boat and ministered to the people. He taught for several hours. When He finished, He told Peter to cast down his net into the water to draw out fish. Peter was tired for he had been up all night and had not caught any fish. Jesus somehow knew that there were going to be fish in the deep water. He saw potential instead of impossibilities. In our lives today, do we look for potentials? Or do we easily give up? Peter was tired, true. But He listened to Jesus and obeyed Him. When he cast down the net, he caught many fish. In fact, the catch was so abundant that they fit the two boats. Peter then knelt down and worshipped Him. Jesus said, “Do not fear for you will be fishers of men.”

Christ came to give us life and life in abundance. Peter, James and John getting two boats full of fish is such a stark example of abundance. Peter, like any other human being was tired and frustrated but He still obeyed Christ. It is in obedience that we will receive God’s favor. The “boat” is a symbol of the church. Fullness and favor should be seen in our lives. If we don’t put our faith in Christ and choose the other way, we will get into trouble. When Noah was instructed by God to build the ark, it was because God saw that he was righteous and told him to save his family and all the animals. But God through Christ at the cross saves all of mankind, even sinners. The message of the cast net is that even if Peter who was a fisherman by profession, could not catch the fish on his own. But when He obeyed and trusted Jesus, he received abundance. In Mark 10:17-22 there was a man who approached Jesus, kneeling down before Him to ask “How can I have eternal life?” Jesus said: “Go sell all your possessions, give the money to the poor and come follow me.” The man was upset, for he could not part or let go of his possessions and went away sadly. In the case of Peter, he left everything behind and followed Jesus. Like Peter, our security should be in Christ. If we put our faith in things, we will lose the blessing of God.

1 Timothy 1:1 “Paul, an apostle of Christ Jesus by the command of God our Savior and of Christ Jesus our hope.”
Colossians 1:27 “To them God has chosen to make known among the Gentiles the glorious riches of this mystery, which is Christ in you, the hope of glory.”
Romans 8:10 “But if Christ is in you, then even though your body is subject to death because of sin, the Spirit gives life because of righteousness.”

The provisions of God are full to capacity. The boat will not sink even if it is full. It does not matter if people, circumstances or events are against us. What matters is who is for us. God is with us. When we go out of the physical church, He doesn’t stay behind. He goes with us wherever we go. He is our all in all.