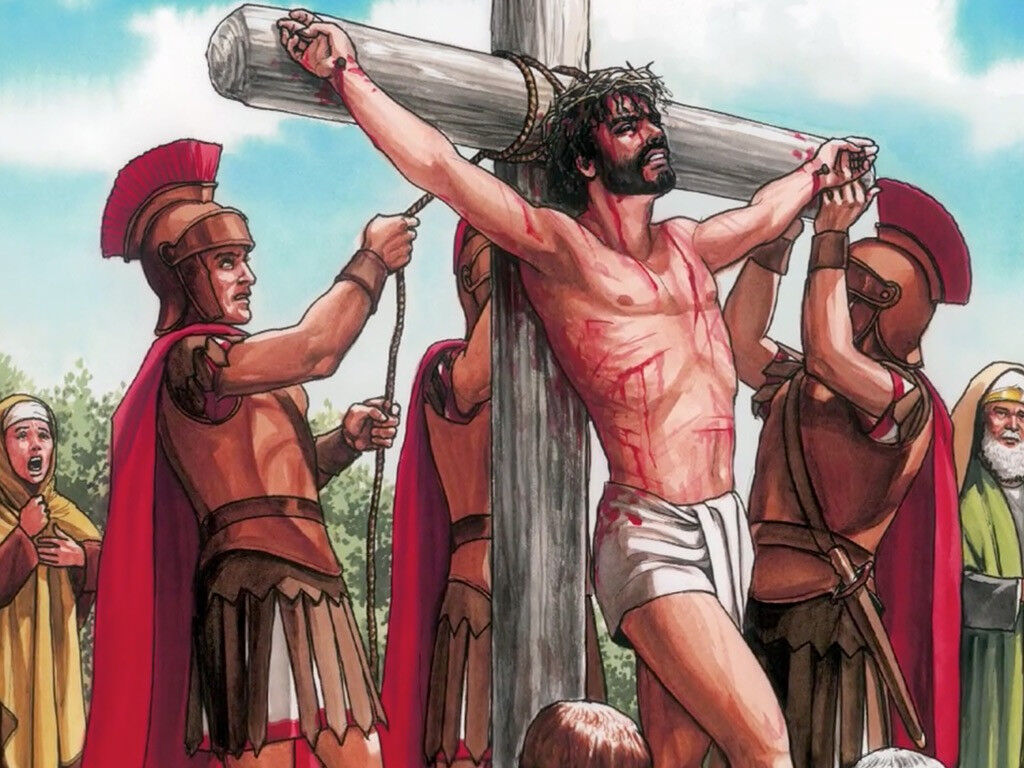 Today is Good Friday. The Altar is stripped, the table is bare, the chalice is gone, there are no candles. It would seem that this day is not good, but it is good. From the death of Christ comes the life that God has given us and it is that which is good. Out of Christ’s death comes eternal life. We need to give God all the honor and the praise that is due to Him.

The words in Isaiah 52:13-53:12 speaks of the glory and suffering of Christ. It speaks clearly to us about what Christ did in our behalf so that we would be set free. God made certain of His great love for us.

Again, this speaks of the trials that Christ had to go through and how He had to bear all the mockery and the ridicules.

Hebrews 10 stresses the fact that Christ’s sacrifice was once and for all. God’s plan had been laid out for us through this one great sacrifice. He did everything for us. It was the turning point of the world. His act of sacrifice gave access upon which the world could turn to God.
While Isaiah tells us the things Christ had to go through, Hebrews gives us the results.

We are reminded of what God did for the children of Israel. How the blood that came from the sacrificial lambs that were sprinkled on the doorposts saved therm. With Christ in the new testament, it is the Cross. His suffering and shed blood brought about salvation for all mankind.

John 18 gives us a thorough account of Jesus going to Kidron valley to pray, and how Judas betrayed Him, bringing with him soldiers with torches, lanterns and weapons. How Jesus faced them without fear and told them “I am He,’ when asked if He was Jesus of Nazareth. How Peter struck the ear of one of the soldiers, how Jesus was arrested and brought to Annas, the brother-in-law of Caiaphas. How He was then sent to Caiaphas, how Peter denied Him thrice, how He was questioned by the high priest, how Jesus stood before Pilate.

John 19 continues to tell us about Jesus being flogged and crowned with twisted thorns. And how Pilate found no fault in Him and even tried to set him free, but was overruled by the shoutings of the crowd to “crucify Him.” How He was sentenced to be crucified and was made to carry his own cross to the place of the skull called Golgotha. A sign was attached to the cross and it was written in Aramaic, Latin and Greek. It read, JESUS OF NAZARETH, KING OF THE JEWS. Near the cross, Jesus saw His mother. In the midst of His suffering, He was thinking of her welfare. And he entrusted her into John’s care. Then Jesus said, “I thirst.” A jar of wine vinegar was soaked on a sponge and placed on the stalk of a hyssop for him to drink. And when He had done that, He said, “It is finished.” Christ had done His part. He had taken the sin of the world upon Himself on behalf of mankind. Sin was the source of all evil and sorrow. “Into Thy hands, I commit my spirit.” Christ gave His life willingly. One of the soldiers pierced the side of Jesus, and out flowed blood and water. The piercing of the heart was a symbol that the heart of God is open for all.

This was the Day of Preparation, so the Jewish leaders did not want the bodies left on the cross before the Sabbath. The legs of the two thieves were ordered to be broken and taken down. But they did not touch Jesus. Joseph of Arimathea who was accompanied by Nicodemus came to claim the body of Jesus and placed Him in a new tomb.

The cross was such a major event because God was redirecting the course of world events. The time He was nailed to the cross was the time of the Passover, when lambs were brought to be sacrificed. Christ was the Lamb of God. He came for one purpose and that was to destroy the works of the enemy and to restore us to the family of God. The first Adam failed. But the 2nd Adam won. It is God’s desire that all men be saved.

Hebrews 9: 22 without the shedding of the blood, there is no forgiveness.
Colossians 2: 13 When you were dead in your trespasses, God made you alive with Christ. He forgave all your sins.

May Good Friday be a reminder to us all that Christ was willing to pay the price for our sins.