He is the God of the Living 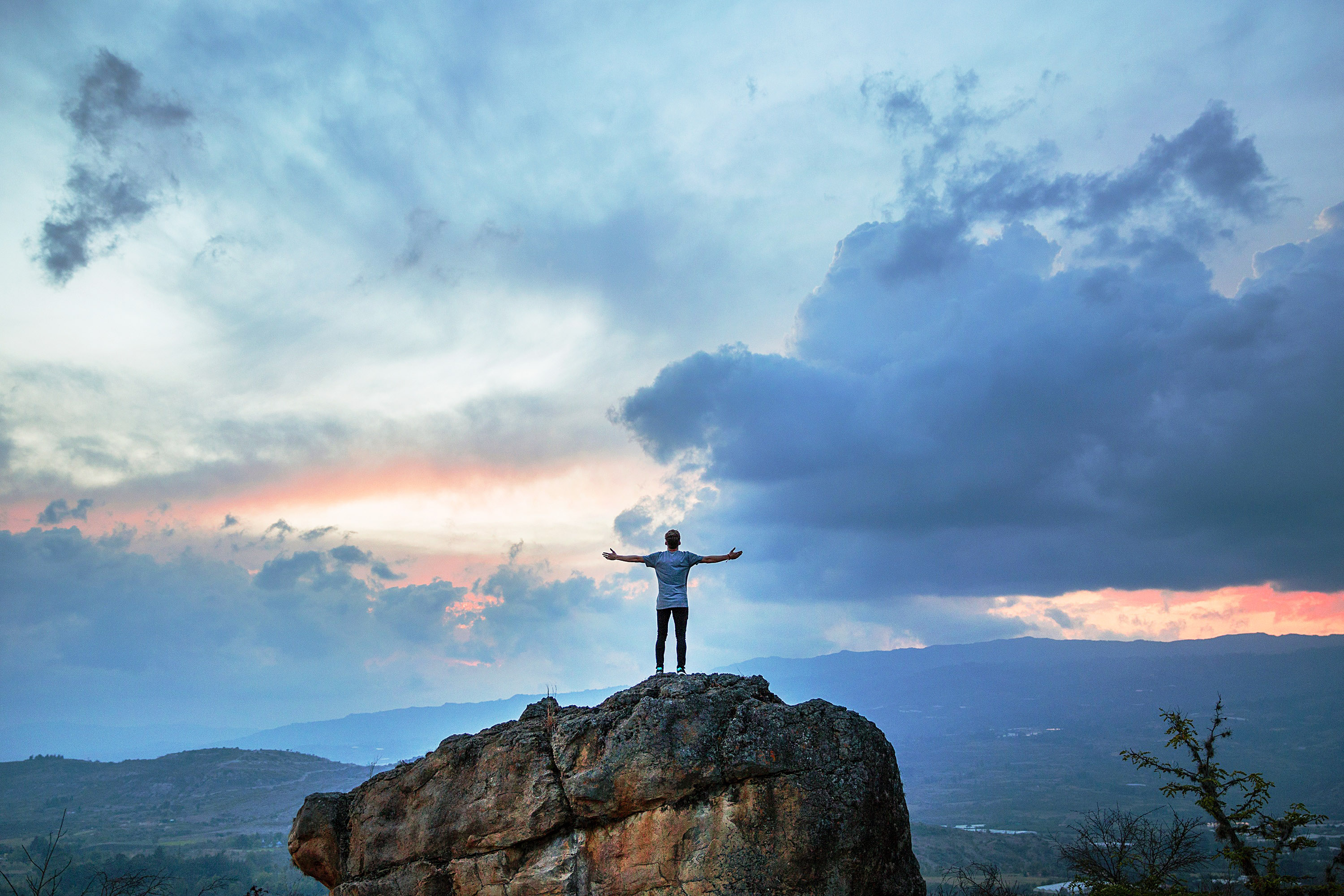 “He is the God of the Living”
Archbishop Loren Thomas Hines
25th Sunday in Ordinary Time
November 6, 2016

Sometimes when we read the Scriptures, we don’t pay attention to the whole message and only focus on the parts that we need at that moment. Perhaps the Gospel today is one of these Scripture readings – we forget the first and last parts so we don’t get the message. The Gospel today tells of a hypothetical situation; no woman marries seven men, all brothers. What the Gospel is telling us is that the Sadducees who questioned the Lord didn’t understand God, His ways and His plan for man. We do that many times; we blame Him for our problems when it is our emotions ruling us and we ask, “Where is God? Why isn’t He handling this problem? Why isn’t He helping me?” We should always remind ourselves that God never fails. His help will always come.

The Old Testament reading is about Job. For many of us, our knowledge of Job is limited to his tribulations. Job wasn’t a Jew but a Gentile. His wife was an Arab. He was a very wealthy man and “the greatest of all men of the east”. He had seven sons and three daughters, and owned 7,000 sheep, 3,000 camels, 500 yokes of oxen, 500 female donkeys and many servants. He wasn’t Jewish and his father wasn’t a believer, and therefore he wasn’t following Jewish tradition. But he knew God and he was blameless, upright, fearing God and turning away from evil. His family was united, a picture of perfection. The beauty of Job is even if he had confidence in his children, whenever any of them would hold feasts, he “would send and consecrate them, rising up early in the morning and offering burnt offerings”, in case they sinned and cursed God in their hearts during these feasts.

The book of Job tells us that one day, Satan presented himself before God. This is impossible. We have to be careful how to interpret Scripture. Evil cannot exist in heaven. If we don’t understand this, we’ll believe that he has access to God (even if he can communicate with God like we do). In Job 1:7, Satan told the Lord that he came from “roaming about on the earth and walking around on it”. (This is a wake up call for us. If our hearts are divided, it will be so easy for the enemy to enter in. We should be careful to keep our hearts fully for God and not be lustful and greedy.) Then the Lord said to Satan, “Have you considered My servant Job? For there is no one like him on the earth, a blameless and upright man, fearing God and turning away from evil?” But Satan told God that Job fears Him only because God has blessed Job so much. Then he said that if the Lord would “put forth Your hand now and touch all that he has, he will surely curse You to Your face”. So God gave Satan permission to go against Job, but not to take his life: “Behold, all that he has is in your power, only do not put forth your hand on him”. God had to permit it. The enemy can’t do everything that he wants to; he has limitations. As a result, Job lost everything he had – his children, his servants, and all his possessions. He was also afflicted with painful boils from the sole of his foot to the crown of his head, leaving him in torment. Get the picture: here was a blameless man who prospered in all his ways, then all of a sudden, everything is gone save his wife. His friends came to tell him why this happened to him. His wife asked him to curse God and die. But he didn’t heed any of their words but held firm to his faith in God. He was a Gentile! (Through the Old Testament, we see that God works through Gentiles, blessing them to get the attention of the Jews, making them jealous so that they might turn away from their rebellion against God.) Job eventually lost everything, including his wife, but he held on to his faith. He had confidence in God, believing that his Redeemer never fails. He didn’t accept it when his friends told him that he sinned and so he’s being punished.

The faith of Job is a challenge to us today. When things go wrong, we despair and ask, “Why is this happening to me? Where is God?” Our greatest temptation is to lose our faith in God. To avoid this, we should remind ourselves that no matter what happens God won’t fail. Job was a pattern for Christ; he suffered for things he didn’t do. Christ is blameless; He is the Son of God, yet He took upon Himself the sins of the world.

Revelation 12:10 “….the accuser of our brethren has been thrown down, he who accuses them before God day and night.” The accuser is the devil but Christ has thrown him down and we overcome him because of the blood of the Lamb. Job’s faith overcame all the tests thrown at him. Everything that he lost was restored to him and the Lord increased all that he had twofold and blessed Job’s latter days more than his beginnings. He had 7 sons and 3 daughters and died an old man and full of days. This is the kind of faith we must have. In times of trials and difficulties, we don’t give up.

I probably face more trials and tribulations than you do. I know how it is when it seems that everything is turning against you. My car broke down, so I had to bring the truck today, which is also not in good condition; its airconditioning isn’t working. As we were going through the zigzag, I was praying: “God, I know You’re still in power. We’ll make it”. We were almost at the top of the zigzag when the car quit – no power at all. I got out, opened the hood and looked at the engine, even if I don’t know anything about car troubleshooting. I saw that the cable connection to the battery had come off, so I put it back on and it worked; the car started! The temptation was there to give up and just not go to church. But I wouldn’t give up because I’m determined to do the work of God. I tell you about this that you may know that I also undergo trials in relation to the lesson on Job, but I was thanking God all the way here. Romans 5:3 tells us to exult in our tribulation. Let’s not allow it to steal our joy. If God is for us, nobody can be against us.

2 Thessalonians 2:13 “….God has chosen you from the beginning for salvation through sanctification by the Spirit and faith in the truth.” If God chose you, how can anyone or anything be successfully against you? When you know God, it doesn’t matter what comes against you. He is a God of compassion, mercy and forgiveness, but He allows trials to come into our lives to build up our confidence and faith in Him. God will bring the victory. St. Paul told the Thessalonian church that they were sanctified by the truth, so “stand firm and hold to the traditions which you were taught whether by word of mouth or by letter from us”. There are two kinds of traditions – man’s and God’s. Too often we are influenced by man’s traditions, such that we put much value to material wealth and call ourselves blessed when we’re prospering. When we’re materially blessed, it doesn’t necessarily mean that our relationship with God is good. In some cases, the wealthy don’t lead righteous lives. The greatest blessing in our life is peace because a peaceful life brings joy and health. This peace comes from a relationship with God and a deep faith in Him. 2Thessalonians 3:3: “But the Lord is faithful, and He will strengthen and protect you from the evil one.”

In today’s Gospel, the Sadducees who didn’t believe in resurrection questioned Jesus about it. They brought up the Jewish tradition that if a man’s brother dies, having a wife, and he is childless, his brother should marry the wife and raise up children to his brother. Then they made up a story about seven brothers and the first took a wife and died childless, and the second and third married her and in the same way all seven died, leaving no children. So they asked Jesus whose wife she will be in the resurrection. They were so caught up in the traditions of men that they didn’t understand God’s plan at all. Jesus told them that in heaven, things are not the same. “Those who are considered worthy to attain to that age and the resurrection from the dead neither marry nor are given in marriage; for they cannot even die anymore, because they are like angels, and are sons of God being sons of the resurrection.” At the resurrection, we’ll be like angels in our commitment to God and be totally consumed by the glory of God. Jesus was telling them that heaven is so much greater than earth that they won’t even think of things like marriage. The things of heaven will consume us. Heaven is focused on only one thing – giving glory, honor and praise to God. All needs are met in heaven. There is no sickness, pain, tears, enmity and division in heaven; only perfection. We will be perfect in Christ.

In preparing for this life of perfection, our focus should be on knowing God and His Kingdom. “He is not the God of the dead but of the living; for all live to Him.” Our loved ones aren’t in cemeteries. Their souls have left to be with God. We need to understand this. Physical death is a beginning of life, a passing on, and we trust God that whatever He has prepared is beyond our expectation. The dead don’t look back here and worry about us because they are so filled and consumed by the glory of God. Our values will change. We must know God! Yes, trials and tribulations will come but fix your gaze on God. He will not fail you. Put your confidence in God, not on the things of this world. Even if the enemy tries to put obstacles on our path and make life difficult, don’t give up. He never fails; He never forsakes.