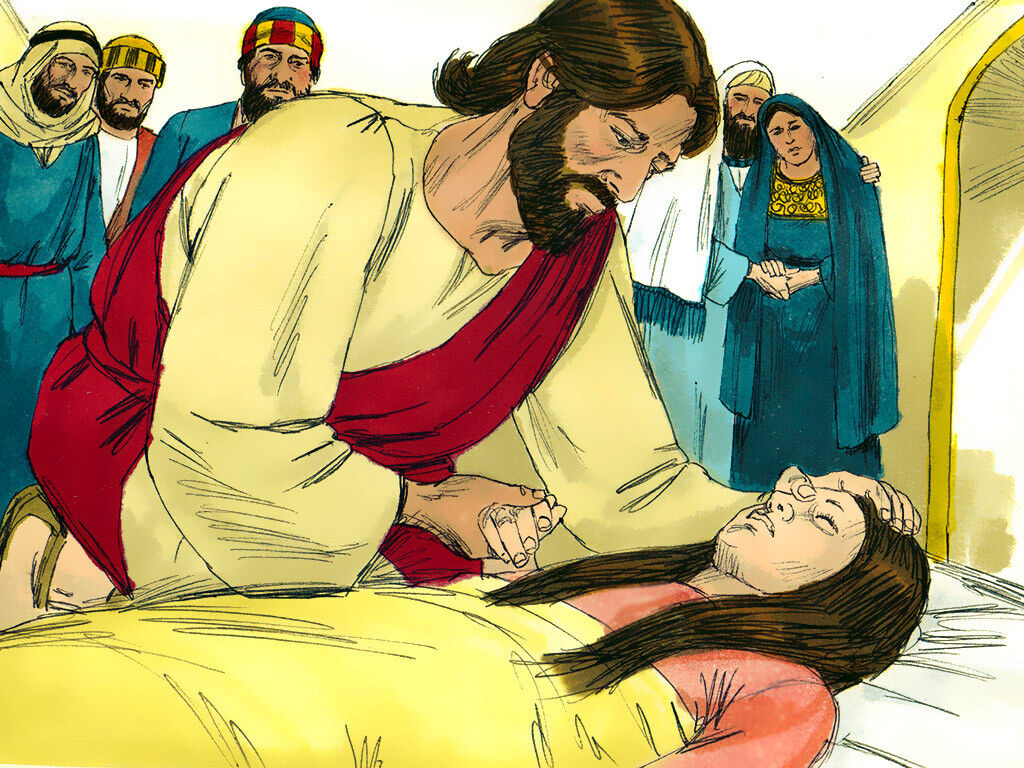 As the apostles are following Christ, we are also on a journey with Him. We are reminded that a small seed could bring forth life. We were implanted with a seed that will also grow and bear fruit if we nurture it well and take care of its soil. Christ came to teach us how life is to be lived. We are also reminded that in the midst of a storm, Christ was at peace. He gave the direction,” we are going to the other side.”

Today, we learned that as Christ and His apostles are ashore, a demon-possessed man approached Him and bowed before Him. He begged that the demons would leave his body. So Christ delivered him and the demons entered a herd of swine and jumped down from the steep into the sea where they all drowned. The people were afraid and began to plead with Jesus to leave their region. When they reached the other side, in the midst of the crowd, a leader from the synagogue named Jairus came to Him. He belonged to a group who hated Jesus. They were intimidated by His presence. But Jairus bows down and pleads to Jesus to go to his house because his daughter was sick. He asked Christ to lay hands on her so that she would be healed.

As they were on their way, a woman with an issue of blood who had gone to several physicians in a period of 12 years but never got healed, came up from behind Him saying, “If only I could touch the hem of His garment, I will be healed.” And when she did, the issue of blood was gone immediately. Christ felt life leave Him when the woman touched His cloak. Because of these unexpected incidents along the way, there was considerable delay in his journey. A messenger from the house of Jairus came and said, “There is no need of Christ going there because the daughter had died.” Jesus overheard this and said, “Stop fearing. Only believe.” In the Greek, this is what it meant. When fear is in the heart of people, it destroys faith. “Stop fearing, only believe!”

God gives, God does not take away, because even if we die in this body, we still live. Jesus took Peter, James and John and arrive at the house. There were professional mourners all around. Jesus said, “why are you mourning? This girl is not dead. She is only sleeping.” Jesus here is telling us that death is just like sleeping. Jairus went against everything he stood for in order to focus on the healing of his daughter. Faith is the only remedy against fear. We are to have hope when a loved one dies because we know he lives. The young girl who was 12 years old was considered a lady ready to face responsibilities in society. Jesus takes the girl by the hand and tells her to “arise!” Immediately the girl gets up and starts walking around. Normally, when we have been lying in bed for a period of time, that when we do get up, our balance isn’t perfect yet and there are times we are still groggy. But this girl was up and about and walking. Again, Jesus was showing to us that His healing is total and immediate.

The contrast of hope is despair. The people in the house were in despair but Christ was calm. He did not panic. He did not rush to the girl. He is teaching us faith, not fear. Hope and not doubt. Our faith should be built on this truth. When God heals, he does it for free. He does it in the simplest way. He merely took the girl by the hand and tells her to get up. The woman with the issue of blood just touched His garment. Only a touch can do wonders. We must believe this that all things are possible with God. Thy Kingdom and Thy will be done on earth as it is in heaven.

Ephesians 5:14 For this reason He says, “Awake, sleeper, and arise from the dead. And Christ will shine upon you and give you light.”

He is speaking to those who are not listening to His word and that includes us when we do not listen. The provisions are ours but we have to receive His word.

Christ fed the multitudes. He calmed the sea. He healed the sick. He raised the dead. In fact, He Himself rose from the grave. If only we would believe what He is saying. In the fiery furnace where the three Hebrew children were thrown into, they did not burn because Christ was the 4th person amongst them. During this pandemic, we need not fear, for He will not fail us.

It is Christ in us that we are able to accomplish things. He is the Master of all. He reigns and rules in our lives. He is our peace, our strength, our joy. This is how we should live out our lives. Isaiah 26:19 But your dead will live, Lord; their bodies will rise – let those who dwell in the dust wake up and shout for joy – your dew is like the dew of the morning; the earth will give birth to her dead.”.