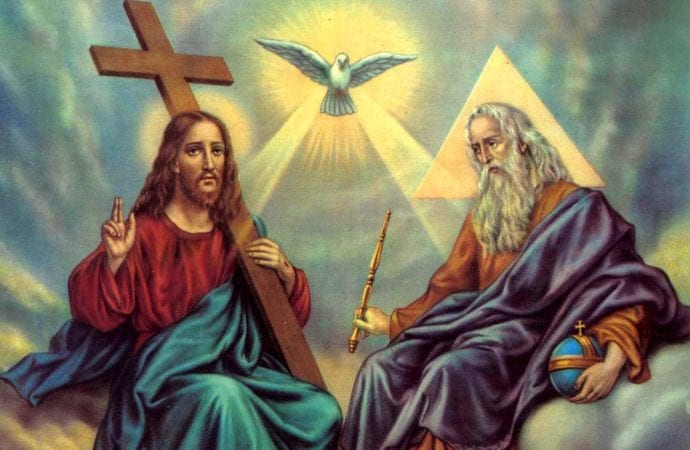 Feast of the Holy Trinity

The Trinity is a subject that has caused divisions in the Church. In the Collect, we ask GOD to show us the unity in the Trinity. Christianity was built on the unity of the Trinity. They are three Persons but one GOD. So united are the three that they appear to be one. They function as one.

GOD hasn’t stopped talking to us. Not everything of GOD is contained in the Bible. Much of Paul’s writings didn’t come directly from Christ but from the Holy Spirit who revealed to him things that the disciples didn’t know and understand because they weren’t ready to handle them. “I have many more things to say to you but you cannot bear them now.” John 16:12. GOD knows what we can handle. He won’t give us more than what we can take and understand. The disciples had been with Christ for three years but He said that He had many more to tell them. “But when He, the Spirit of Truth comes, He will guide you into all the truth….” It’s very important for us to be able to hear what the Holy Spirit is telling us. He sometimes tells us things that are contrary to what we believe and the battle is to believe what He is telling us and let go of our misconceptions. Clearly, because GOD gave us the Holy Spirit, He is not finished talking to us, but He will only reveal to us what we can already accept, so He sends the Holy Spirit who “will not speak on His own initiative, but whatever He hears He will speak and He will disclose to you what is to come…He will take of Mine and will disclose it to you.” The Holy Spirit speaks of Christ and what Christ has is from the Father; these are the things that the Spirit will reveal to us. This is the unity in the Trinity. They do not act on their own. They don’t have their own initiatives, desire and will. They speak only what the Father tells them.

This is why the world will never succeed; there are too many divisions. Democracy has not brought us together. Unity requires humility: “I accept even if I don’t understand it now”. Jesus accepts what the Father tells Him and obeys. The Holy Spirit takes these and reveals them to us. “He will glorify Me for He will take of Mine and will disclose it to you.” They always go back to the Father. The Father is unbegotten, the fountainhead/source of Deity. The Son is eternally begotten of the Father. The Holy Spirit proceeds from the Father. The unity comes from the Father. This is intended to be the model for humanity, with the father being the head of the home and unity in the family proceeding from him. Unity is the foundation of everything GOD intended us to have. The three Persons are distinct but not separate; all one in essence and nature, all coming from the Father. GOD continues to reveal to us the things that He wants us to do through the Holy Spirit. These revelations will not be all contained in the Bible. They will never contradict the things written there but GOD will go deeper, will expand on what has already been written so we can have a better understanding of GOD’s ways and plans. The Holy Spirit will guide us into all truth.

“Then one of the seraphim flew to me with a burning coal in his hand, which he had taken from the altar with tongs. He touched my mouth with it and said, ‘Behold, this has touched your lips; and your iniquity is taken away and your sin is forgiven.” Isaiah 6:6-7 This Scripture speaks to us of the Holy Eucharist. Sin has been destroyed because of the work of Christ. Coal burns and destroys, just as the work of Christ has destroyed sin.